This article is based on some common basic questions about What is Computer? Who Invented the Computer? Uses of Computer.

A computer is an electronic device that modifies and stores data or information. It has the ability/capacity to store, retrieve and process data. One can use computer to type/sort documents, send emails, play games and browse the web. A person can also use it to create or create spreadsheets, presentations and videos.
A computer is a machine using programming techniques can be instructed to automatically complete a sequence of arithmetic or logical operations. Modern computers have the ability to follow generalized sets of operations, called programs. These programs enable computers to perform highly detailed tasks.
Computers are used as control systems for a range of industrial and consumer devices. This includes simple special purpose equipment such as microwave ovens and remote controls, factory equipment such as industrial robots and computer aided design, and general purpose devices such as personal computers and mobile devices such as smartphones.
The Internet run on computers and connects millions of other computer system and their users.Early computers were only counted as devices. Since ancient times, simple manual tools like abacus help people to calculate numbers.

What is Computer? Who Invented Computer? Uses of Computer

In Early 19th Century Charles Babbage, an English mechanical engineer and polymath, conceived the concept of a programmable computer, also known as the “father of computers” invented the first mechanical computer. in 1833 which realized him a much more general design the Analytical Engine. 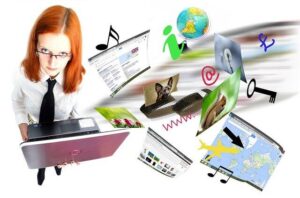 Computers make life faster for human beings in various ways. Computers are used to control large and small machines which in the early days were controlled by humans. Most people’s around the globe uses a personal computer in their home or at work to complete tasks.