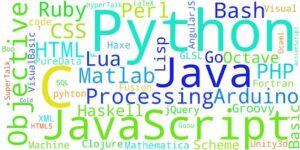 In this post article, I will share with you the Best Top 10 programming languages you can learn in academics of computer science or Information Technology pursuing degree in 2021-22.
Top 10 Important Programming Languages a Computer Science
Student must know:-

C Programming language developed at ATnT Bell Labs by Sir Dennis Ritchie way back in 1972 as an pro version to B language with some advanced features . It has become the most widely used programming languages, with C compilers from various vendors available for the majority of existing computer architectures and operating systems.
This Language provides a base to learn many programming
languages as C++, JavaScript, PHP. You can view the full C Programming for Beginners notes for academic students of Bsc Computer Science or Information Technology (IT), Diploma (CS/IT) or B.E computer Engineering.

C++ programming language developed by Bjarne Stroustrup at Bell Labs in 1979 following ANSI Standards as an enhancer for C Programming Language. It is a powerful general-purpose programming language. It can be used to develop operating systems, browsers, games, and many more. C++ supports different ways of programming like procedural, object-oriented, functional & Case-sensitive . It makes C++ powerful as well as flexible.

Java was developed firstly by James Gosling at Sun MicroSystem in 1995 which was since acquired by oracle in 2010 , a most popular, powerful, effective & evergreen programming Languages in history and my favorite too. The language was initially called Oak after an oak tree that stood outside Gosling’s office when he started it in 1991 then named as Green finally fixed to Java from Java Coffee. It follows the basic syntax of C/C++ programming language.
Latest Java programming language comes with JDK 15 version to be launched later this September 2021. It is used by many companies as Twitter, Netflix and many Android Apps.

It supports multiple programming paradigms, including structured, procedural, object-oriented, and functional programming.
Python language constructs and object-oriented approach aim to help programmers to write clear, logical code for small and large-scale projects.
For example: what i mean to say is that if you want to do addition of two numbers then you have to write code as “no1+no2 or 1+2” simple easy, no need to declare or define variables or initialize variable values as such like other java, C/C++ programming languages which again ease beginners to learn quickly.

Rather HTML is not a programming language, then also it comes as an important concern for programmers. It was developed by Tim Berners-Lee in year 1991, but HTML 2.0 was the first standard HTML specification which was published in 1995 and now we use HTML 5 since 2012.
HTML (Hyper Text Markup Language) is a standard mark-up language for documents ,web pages and web applications designed to displayed in web browser. It can be assisted by technologies such as Cascading Style Sheets (CSS) and scripting languages such as JavaScript.

PHP stands for Hypertext Preprocessor a Open Source Programming Language for web development and creating interactive web pages which held with databases to store data.Now -a – days PHP is a widely used programming language tool for developing web applications with databases, as it has been used by Facebook and Yahoo.
It is a general-purpose scripting language that is especially suited to web development very much popularly known today, created in 1994 by Rasmus Lerdorf, the very first incarnation of PHP was a simple set of Common Gateway Interface (CGI) binaries written in the C programming language.

JavaScript is high-level, often just-in-time compiled, and multi-paradigm.It has curly-bracket syntax, dynamic typing, prototype-based object-orientation, and first-class functions.
Alongside HTML and CSS, JavaScript is one of the core technologies of the World Wide Web. JavaScript enables interactive web pages and is an essential part of web applications. Many websites use it for client-side page behavior, and all major web browsers have a dedicated JavaScript engine to execute it.
As a multi-paradigm language, JavaScript supports event-driven, functional, and imperative programming styles. It has application programming interfaces (APIs) for working with text, dates, regular expressions, standard data structures, and the Document Object Model (DOM).
JavaScript engines were originally used only in web browsers, but they are now embedded in some servers, usually via Node.js. They are also embedded in a variety of applications created with frameworks such as Electron and Cordova. The rise of multiple frameworks like jQuery, Angular, and React.js has made JavaScript even more popular.

Unix is an Operating System was originally written in assembly language but was soon rewritten in C, a high-level programming language which distinguishes itself from its predecessors as the first portable operating system, which allows
Unix to operate on numerous platforms.
In academics you have a subject that enables you to operate linux operating system and its commands lets u do the same.
Now-a-days many job openings are there for PL/SQL Unix Support profile in IT MNC Comapanies.

Ruby is an Open Source Programming language designed & developed by Yukihiro “Matz” Matsumoto in 1995 a personality from Japan. Ruby is high-level general purpose programming language, it is used to build web applications, system utilities and many more.
It is dynamically typed and uses garbage collection and has blended parts of some languages (Perl, Smalltalk, Eiffel, Ada, and Lisp) and also supports multiple programming paradigms, including procedural, object-oriented, and functional programming.
You can read this article for C Programming full compiled notes for beginners Read more
For Java Important Practical Questions you can refer this Know More